While Media Obsesses Over Pussy-Gate, US Debt Soars To $19.7 Trillion

Submitted by Simon Black via SovereignMan.com,

One of the things that caught my attention this morning was that the US government’s debt level has soared to just a hair under $19.7 trillion.

To give it some context, that’s up over $170 billion in just eight business days.

It’s almost as if Barack Obama is intentionally and desperately trying to breach the $20 trillion mark before he leaves office in January.

Of course, this hasn’t been reported anywhere because the media is too busy pretending to be shocked that Donald Trump is a womanizer.

And yet the debt is a much, much bigger story… though admittedly one that is far less entertaining.

The election is merely a fight over who gets to be the band conductor while the Titanic sinks. And the debt is precisely the reason for this.

Total US public debt has skyrocketed over the last eight years by $9 trillion, from $10.6 trillion to $19.7 trillion.

And in the 2016 fiscal year that just closed two weeks ago, the government added a whopping $1.4 trillion to the debt, the third highest amount on record.

Plus, they managed to accumulate that much debt at a time when they weren’t even really doing anything.

It’s not like the government spent the last year vanquishing ISIS or rebuilding US infrastructure. They just… squandered it.

Now, Nobel Prize-winning economist Joseph Stiglitz says we shouldn’t worry about America’s prodigious debt, and anyone who fusses over it doesn’t understand economics.

Stiglitz claims that we wouldn’t judge a private company like Apple based solely on its debt.

We’d look at other factors like assets, income, and growth before making an assessment of the company’s financial health.

Singapore, for example, is a country with an extremely high level of debt. At first glance, it looks dangerous.

But if you dive deeper into the government’s balance sheet, you see an enormous abundance of cash reserves.

The US, on the other hand, is not in this position.

You already know the income numbers– the government loses billions of dollars per year, and the trend is negative.

As for its balance sheet, the government reports just $3.2 trillion in assets against $21.4 trillion in liabilities, for a NET position of NEGATIVE $18.2 trillion.

Now, when we’re dealing with trillions, it’s clearly not an exact science.

There are many economists who argue that the federal highway system, military, and federal tax authority should count as “assets” that are worth trillions of dollars.

Maybe so. But to be fair, one should also count the trillions of dollars of repairs needed on the highway system as liabilities.

Or the trillions more in cost of wars. Or the $40+ trillion in unfunded liabilities from Medicare, Social Security, etc.

It’s also important to note that America’s debt is growing at a far quicker rate than its economy.

When President Obama took office, US public debt was about 73% of GDP. Today it’s 105%. So even as the economy has grown, the debt has grown much faster. 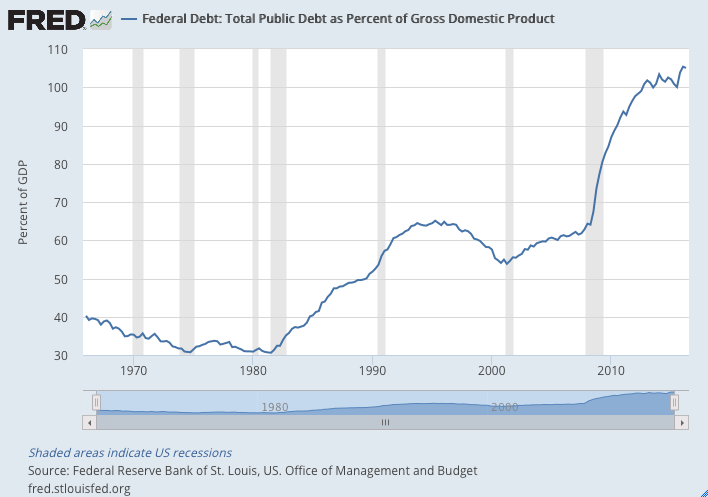 Any way you look at it, the US government is already insolvent, and its situation is becoming worse.

We can choose to willfully ignore this obvious trend and delude ourselves into thinking that the continued expansion of US debt will forever be consequence-free;

Or, we can acknowledge the tiny possibility that maybe, just maybe, there may be some adverse consequence, and plan accordingly.

That’s the great thing about risks– we can take out insurance to protect against their consequences.

Of course, there is no policy from Met Life or GEICO which will protect you from capital controls, a default on Social Security, or Global Financial Crisis 2.0.

Yet there are countless options to protect against these consequences.

The premise is simple: if your country is broke, don’t keep 100% of your assets there.

If your banking system is precariously illiquid and questionably solvent, don’t keep 100% of your savings there.

Most of all, it never, ever hurts to have a Plan B and give yourself additional options.

For example, you may be able to take some steps to legally reduce your tax bill; move some funds to a safer, better capitalized bank abroad that pays a higher rate of interest; or obtain a second passport based on your grandparents’ Irish or Polish nationality.

It’s hard to imagine that you’ll be worse off for having taken any of these steps.

And like any great insurance policy, these steps not only protect you against risk, but also give you the chance to make more money and prosper.

(That’s why the ultra-wealthy often invest in insurance policies as an asset class.)

Having a Plan B doesn’t mean hiding in a bunker with a tin-foil hat. Anyone expecting the end of the world is going to be waiting a very long time.

But taking some risk off the table is something that smart, rational people do, especially in light of such overwhelming data.